I recently read a blog post by Richard Byrne on his FreeTech4Teachers blog (if you haven’t subscribed, you should), about using Twitter to search for educational content, resources, and ideas. First off, you do not need a Twitter account to search their system for resources, so this tip can work for anyone. The key is to take advantage of the built-in indexing system that Twitter uses called hashtags. Hashtags are keyword labels used to mark posts so that they will show up in a search by that keyword. Unlike a Google Search where the results are determined by algorithms, these results come from real people who have found resources and liked them enough that they took the time to share (a.k.a. ‘tweet’) them with others.

Great, but we are still dealing with a lot of information from a lot of sources. How can a teacher focus their search for educational content? Enter this fantastic website by Jerry Blumengarten. Jerry has amassed an impressive list of education-related hashtags to choose from. To speed up your search of Jerry’s page, use your browser’s ‘Find’ command (Ctrl+F for WIN, Cmd+F for MAC) to see if there is a hashtag based on the topic you are interested in. When you find a hashtag that fits, copy-&-paste it into the Twitter search box and let the results start pouring in!

Danny Nicholson, author of the Whiteboard Blog, has put together an introduction to whiteboard technology along with some helpful tips for teachers who are being introduced to this technology or who may be struggling to integrate it into their classrooms. Danny covers several different brands/manufacturers including:

IWB technology can be a powerful tool to enhance classroom teaching and learning, but like any other technology it takes time to determine when and where to use it effectively. I think Danny’s tips will help teachers begin this brainstorming process. 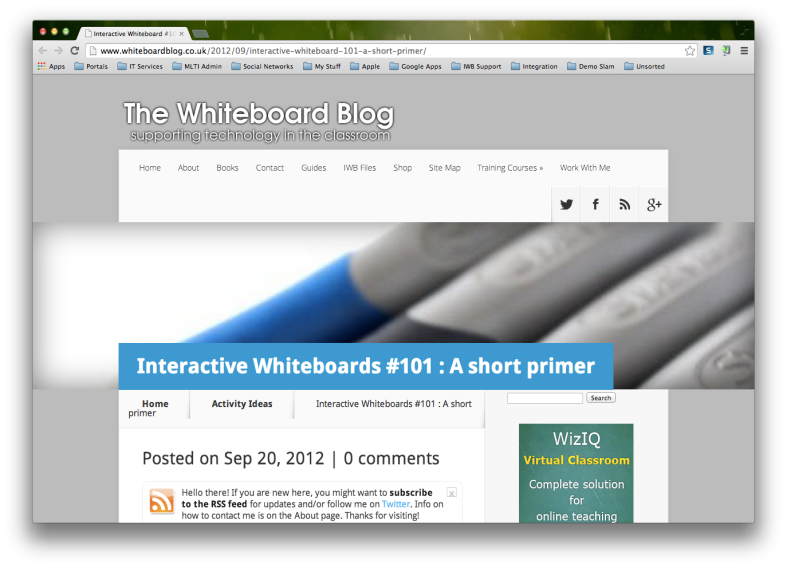 Thanks to FreeTech4Teachers for tweeting this resource.

A while back I talked about Twitter and shared some resources to help teachers get started with using this social media tool, what I called Twitter 101. Now, thanks to a post that recently came across my Twitter feed from Kelly Dumont, I found a great article that talks about some of the more advanced tools, tips, and tricks that are hidden inside Twitter.

In 15 Twitter Hacks That Will Turn You Into a Twitter Ninja, Neil Patel covers such topics as how to use Twitter Lists to organize the people you follow into one place, plus how to look up what Twitter Lists other people have added you to. Another great tip to help those who are having difficulty building up their Twitter network is to use hashtags in your Twitter bio. I highly recommend you check out this blog post for more information on these and the other 13 tips to help you become a Twitter Ninja. 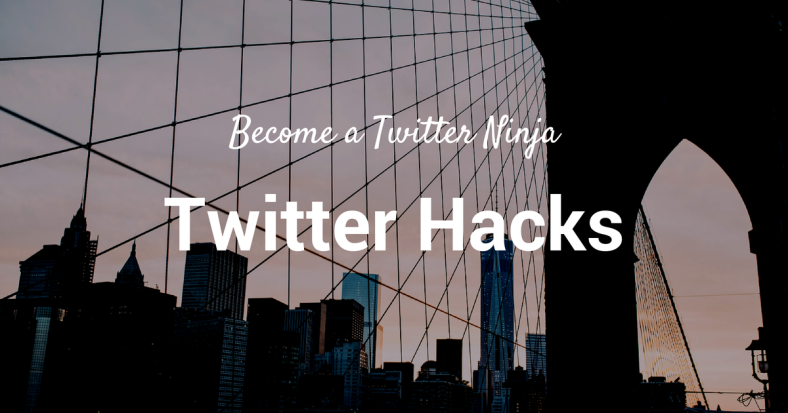 When you visit the Google search page you have a choice in what type of search you would like to conduct besides just the web such as images, maps, news, etc.

But did you know that in some cases you can combine search items to help you get better results? One way this can be done is by giving Google an actual image to search for, then adding key words as necessary to refine the search. Daniel Russell, a research scientist at Google, has created a great video tutorial that illustrates this combination of image and text keywords to help you find what you’re looking for more efficiently.

Thanks goes to FreeTech4Teachers.com for sharing this find.

Fotobabble is a site which combines audio recordings with still imagery to create a new way for students to reflect and demonstrate comprehension. The concept is pretty simple: upload a photo to their website, use your computer’s microphone to record your thoughts, reflection, or comments, save, and then share your ‘talking photo’ via email, embed into a blog or wiki, or post to a social networking service. There is also a Fotobabble iOS App (FREE) that will allow students to creating talking photos on-the-go.

NOTE: An account with email address is required to use this service. An account is free and there are no storage limitations on how big or how many projects can be created at this time. 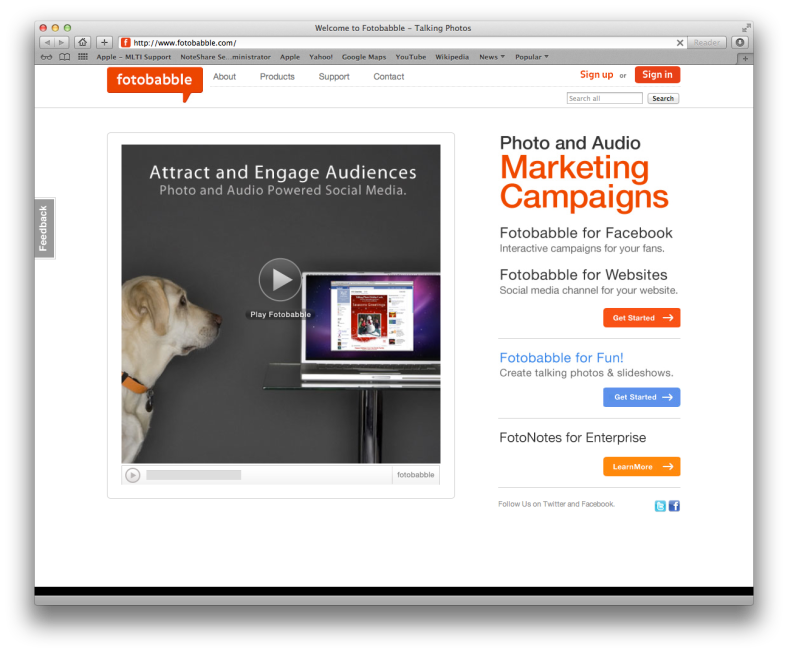 My thanks to FreeTech4Teachers for sharing this site and for Stewart Whitney for pointing out the companion iOS App.

In a previous post, I shared a video clip of two Google engineers as they discussed how to get better Google search results. One of those engineers, Dan Russel, each week posts a Google search challenge on his blog. Later in the week, Dan will post the answer to his challenge and, more importantly, how one might go about solving it. 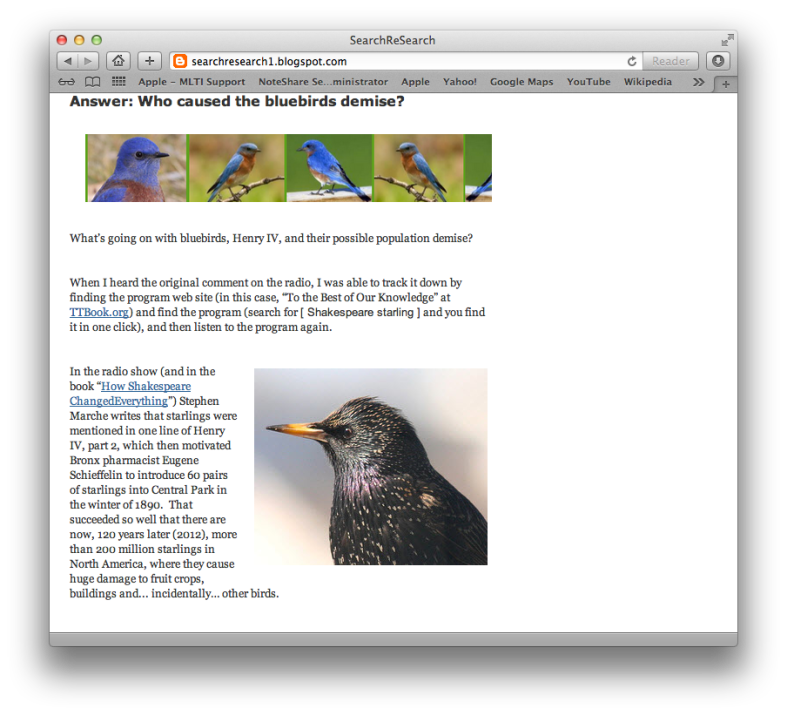 Holy Levitating Slinky – Is it science or an optical illusion?

In a recent post from Kottke blog, a video shows several instances of a fully-extended slinky, suspended in the air, and being let go from above. In slow motion, we see the top of the slinky rushing downward as the bottom of the slinky appears to remain motionless, hovering in space until the two ends finally meet.

How does it work? Is this an illusion or is there a scientific explanation behind this phenomenon? Well, there is a scientific reason for this effect, and included in the video is an attempt to explain it. You can also refer to an article from Wired Magazine for a more detailed explanation.

A Word Cloud is a great way to take a group of words or a piece of text and display them in a different, visual way. Many generators use the frequency that a word appears to determine the font size of that word in the final product (e.g. a word that appears 10 times in a piece will be larger than a word that appears only twice). This article from EducatorsTechnology.com lists 10 of the best word cloud sites they’ve found and a quick description of their site and services. Some of the sites are free while others require an account to use. 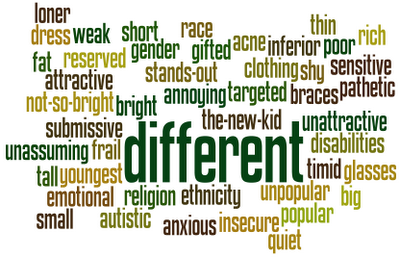 Last week I was on Facebook and a friend shared a news article that they had read and the title peeked my interest. When I clicked on the link, instead of being directed to the article I was first prompted to allow some App. access to my Facebook account. If I said yes, I would be giving the App. access to some of my personal information and allowing the App. to post content to my wall on my behalf…I don’t think so bucko!

Shortly afterward I came across this great blog post from Richard Byrne over at FreeTech4Teachers where he asks, “Have you checked your Facebook Apps. recently?” Richard talks about what I think is very sound advice regarding the management of your Facebook Apps. and verifying that who has access and to what is okay. Just like spring cleaning your home, you should go into your Facebook settings and “clean house” as it were and get rid of those Apps. that you don’t use anymore and no longer should have access to your information.

Oh, and my answer to Richards’ question: No…but I will now.

Mom, This is how Twitter works – Handy tips for everyone!

For those of you who may not know, Twitter is a popular social networking service that allow users to share news, events, and links with one another via posts that must be 140 characters or less. Some people use Twitter to share resources with colleagues within their own PLN (Personal Learning Network). Others use it to gather feedback from a workshop, conference, or professional development event. But how do you know the rules for what to “tweet,” to whom you want the tweet to go to, and how information is shared?

Enter Jessica Hische, who has created a great visual tutorial with examples and clear explanations on how to use Twitter. Jessica walks you through who see what when you tweet, how is direct messaging different from regular tweeting, what re-tweets are, how hashtags work, and the difference between Twitter and Facebook. Each example comes with screenshots that represent what the actual Twitter post would look like in the instance being described. I’ve been a Twitter user since 2007 and I was shocked by what I did not know about Twitter after reading Jessica’s tutorial.

My thanks to Richard Byrne over a Free Technology for Teachers for sharing this resource via, what else, a tweet on Twitter. 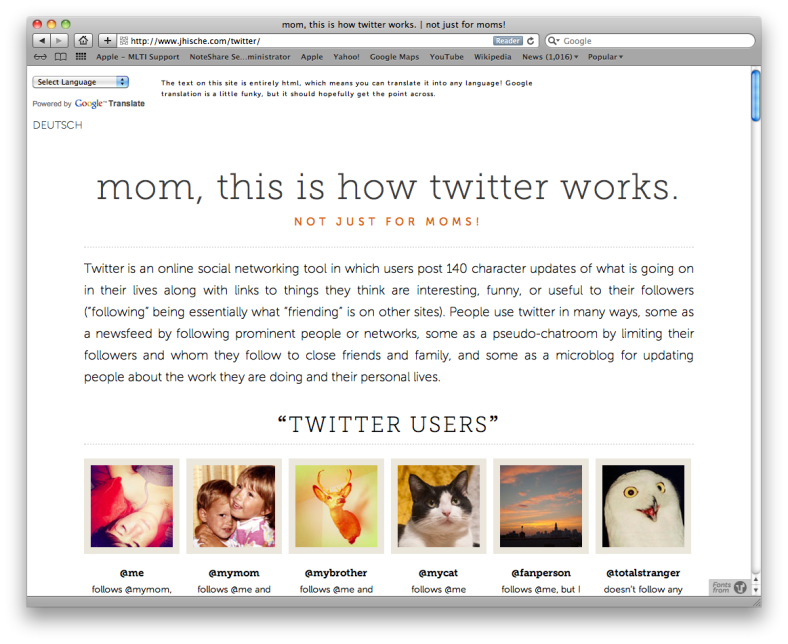